As instructors, we have noticed that sensuality is a difficult topic for a person to confront, even when they have decided to go for their goals and have done everything it takes to attend a course. For many, it helps to have examples of how others have broken through and have come out winning. Here is one such example.

Rob Kandell, a student of the Welcomed Consensus in the late 90’s and co-founder of the successful OMing community, One Taste, recounts his own personal journey of discovery and understanding. The realization, I’m a Chauvinist?, wasn’t always easy to face.

“Do you know that you are a classic chauvinist?”

I blinked at this comment and became more confused. Me, a chauvinist? What? My ego sprang to life, and the lines of defense came instantly.

“I’m a nice guy. I’ve always been a friend to women. I’ve never hurt a woman in my life.”

It was a cold day in January 2000, and I was at the beginning of my personal journey that would eventually lead me to dedicate my life to helping people live free, expressed, authentic and unHIDDEN. However, at that moment, I was raw exposed, and I wanted to escape.

It is refreshing when any human being is willing to take a candid look at themselves, at their perceived foibles and chauvinisms, in order to peel off the protective mask and reveal the true, loving person inside. Through straightforward information and training we experience our students’ growth with them, right in the moment as Rob describes.

My teacher, RJ, of the Welcomed Consensus is a powerful man, smart, intense and vastly experienced in the ways of interpersonal relating. My three-month program was at a tipping point and in this particular session, I was already triggered, confused, and mentally exhausted. He knew it. He could feel that my ego had been bypassed and there was an available doorway for me to walk through.

Weakly, I responded, “uh, what do you mean?”

He told me what he noticed about my behavior towards C and what he knew in his core to be true. The language I used, the posture I took, and my viewpoints on my relationship. He tore apart the facade of my biased view that I was not indeed a chauvinist. He was right, and I knew it.

When Rob decided to continue the conversation, he wanted more from his life and relationships. He wanted the truth and by asking for it he empowered himself to go past his own limitations.

During my journey, I learned an important lesson.

It wasn’t my fault that I was a chauvinist, I was born and raised to become one…

I progressed through school, found a woman who I perceived was a “broken-winged bird,” got on my white horse and rode in to save the day. We fell in love and got married and followed the scripts handed to us by society. Then, she decided she wanted more.

Her desire for more led me to that crucial moment with RJ when he reflected to me the hardest truth I had ever received.

By pushing through this uncomfortable point in his learning, Rob saw and admitted his superiority attitudes which were conditioned into him by society. He was no longer blind to them. He could recognize them and when faced with a situation that brought them up, he could make a different choice.

The newfound reflection and viewpoint that I was a chauvinist took many years to integrate. After years of working with RJ and his team, I started OneTaste with another powerful teacher, Nicole Daedone, who continued to show me the depths of my chauvinistic viewpoints. During this tenure, I add a second charged descriptor to my resume: “misogynist”… Ugh.

For the next several years, I engaged with these parts of myself. Where they lived in my shadow, I confronted them, saw their origins, untied how they influenced my judgments and worked hard to become familiar with them. I experienced shame, fear, laughter, and joy. I started to see how I related to women, I also saw how I could pick alternative viewpoints that would bring me closer to the women in my life.

Choice by choice, Rob set himself free from the constraints of his conditioning. He applied the winning viewpoints his teachers offered and altered his relationships with the women he cared about for the better. 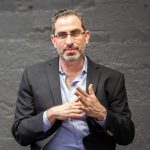 Today Rob is a successful consultant who brings his down-to-earth knowledge to audiences on a multitude of topics. He brings his enthusiasm and acumen to his weekly podcast, Tuff Love, on subjects around relationships, intimacy, communication and gender dynamics.

You can read Rob’s entire article You Are a Chauvinist And you’re not a bad man at The Goodman Project.