If you were to ask a feminist about her perspective on orgasm, the politics of sexual objectification and female exploitation could easily take center stage. On one hand this makes sense, because a woman’s pleasure is personal and intimate. Her experience is difficult to sum up in an activist’s cry. However, the feminist of today can make a case for including the pleasure of orgasm in the ongoing movement. She can build on advances in female sexual expression and extend them further. Read on to understand the process Lila took to herald: Feminist declares orgasm is my movement.


I have been practicing Deliberate Orgasm for almost a year now after taking the Common Sensuality Course offered through the Welcomed Consensus last May. I knew that bringing more orgasm, especially deliberately choosing orgasm as a part of my life, could produce more sensation, pleasure, closeness with my partner, and a whole lot more fun. But what surprised me is how it has changed my perspective of my place in the world.

I grew up in a politically active family where discussing current policies and issues of the world was a common dinner table topic. As I grew up, I strongly identified as an activist and feminist and took part in many protests and actions. This past January when the Global Women’s March occurred I felt obliged to attend.

As I stood on the corner of Market and Polk in San Francisco I watched tens of thousands of fired up people marching down one of the city’s busiest streets. I closed my eyes and felt the intensity of the crowd. I could feel excitement, joy, and overall a sense of unity between men and women marching for the same thing, female empowerment. This unity was not only in San Francisco but also happened in 673 marches in 32 countries with 2.6 million people across the world.

There has never been an action for women’s rights with this massive of a turnout. I felt powerful and unified with my friends and fellow walkers of this earth.  When I went home that night I couldn’t help but wonder if the momentum and intensity of energy that had been built through the day would fade. I thought, “There has to be more that I can do!”

My ah-ha flash moment came to me in a Deliberate Orgasm date, also known as a DO date, that I had shortly after the Women’s March.

My DOer was taking me up on the highest peak of the date. I felt my body begin to lighten. As we got higher within this peak I felt the energy in my body flow from my clitoris and make its way through my limbs. There was this distinct point where I felt myself as my most basic parts, a vessel of sensation, a being of energy where all I do is feel.

When I flashed on this in the date I felt the sensation flow from my limbs into my DOer. I realized that I had put good feelings into another being. I thought to myself afterward, if I can create this surplus of good feelings in my body through orgasm and spread my orgasm into other people, this is the change I can be.

The patriarchal viewpoints that the Global Women’s March was organized to counter have built a standard– don’t feel, don’t acknowledge, don’t love, and sure as hell don’t orgasm. 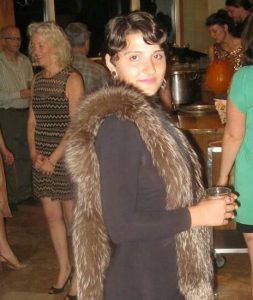 Deliberate Orgasm is my way of uniting with women and men, creating a closeness to my friends and partners. Through orgasm, I have felt what I am made of and experienced my power as a woman. I know without a doubt– feeling is my shift, sensation is my change, and orgasm is my movement.

If you would like to know more about what a DO date is, read a full description of Deliberate Orgasm.