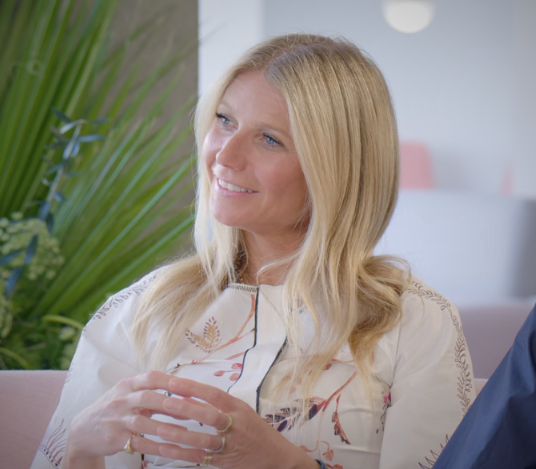 Female orgasm, women discovering their sexual desires through masturbation, and the importance of having a healthy sexual self, free from shame is emphasized and I found it incredibly moving to see and feel a group of women relating over their pleasure.  The obstacles for women to have pleasure are clearly defined and exercises Dodson and Ross teach are featured to overcome these common challenges frequently experienced by women. As Gwyneth Paltrow succinctly states “What we are talking about is how we have this deep resistance to our own genitalia, culturally speaking.  It is really time for that to change.”  This groundbreaking conversation opens the door into exploration beyond the limiting definition of female orgasm currently posited by the mainstream and the episode not only educates but it inspires.

If you could show a real live orgasm, it would be groundbreaking.

Accurate descriptions for women is paramount

Kudos to Gwyneth, her Goop staff, Betty Dodson and Carlin Ross, and Netflix for launching right into The Goop Lab episode with a frank conversation among women about a rarely openly discussed topic on the importance of using accurate language to describe female genitalia. They illuminate how female genitalia is falsely referred to as the ‘vagina,’ when in fact the vagina is solely the birth canal, whereas ‘everything that makes you feel good’ – the glans and shaft of the clitoris, the labia minora and labia majora – are collectively referred to as the vulva. Betty Dodson and Carlin Ross emphasize the importance of using accurate terminology for female pleasurable anatomy, how it lays the foundation for being able to talk openly with another person about the female body and eliminates the mystery, stigma, and shame that commonly shrouds female genitalia.

In The Welcomed Consensus experience of teaching Deliberate Orgasm and educating students about the anatomy of the clitoris and its potential for pleasure, they also have found it is essential to describe the anatomy of a woman’s genitalia as this foundation is lacking for most people, men and women alike.  The Welcomed Consensus continues the conversation on the expansion of women’s orgasmic potential through their body of information and technique they teach called Deliberate Orgasm. Once the foundation of knowing the correct terms for female genitalia is established, it is possible to take it a step further and clearly communicate with a partner about what you want sexually and sensually.

As both Dodson and Sex Doula Isabella Frappier bring up in The Goop Lab episode several times, it is paramount for women to ask for what they want, particularly in the bedroom. There are few places to talk openly about pleasure, let alone acquire education and accurate information about it. “We can’t receive pleasure we don’t ask for” asserts Isabella Frappier. Asking for what you want is a step towards prioritizing your pleasure and sensuality, which can have a profound impact on your life. It is empowering and freeing, and fun!

Adding to the importance of using accurate language when describing female genitalia, Dodson points out “If you could show a real live orgasm, it would be groundbreaking.” The main context through which people are exposed to orgasm is primarily through pornography, which has been found to focus primarily on male orgasm (specifically “the money shot” ejaculation). The females tend to be performing an orgasm, rather than actually experiencing their own pleasure. “Faking orgasms is like leaving a breadcrumb trail to what doesn’t turn you on” says Frappier. The representation of women having real orgasm on film is a concept the Welcomed Consensus have been a proponent and practitioner of since its inception, releasing its first video on Deliberate Orgasm in 1996, where you can see it demonstrated.

In our experience of teaching Deliberate Orgasm, we have found that it is essential to describe the anatomy of a woman’s genitals as this foundation is lacking for most people, men and women alike.

Extending orgasm and your own pleasure

As Dodson and Ross point out, most people know about the type of orgasm which involves tensing up and going over an edge, Dodson coaches women and Ross demonstrates another way to extend the pleasure before climaxing. In addition, there is even another model of orgasm available, practiced and taught by The Welcomed Consensus that doesn’t adhere to the standard up and over in a climactic burst, where people experience a short lived spike of sensation. It is a paradigm of orgasm that if graphed out looks more like a dome than a spike. The Welcomed Consensus describe it as the female model of orgasm.

In this model, one is not looking ahead toward the goal of climax akin to male ejaculation, but rather enjoying the experience one is having in the present moment for the pure pleasure of it. The Welcomed Consensus female model of orgasm is a pleasure-oriented orgasm, where the goal is to feel and enjoy each stroke, and take pleasure in the whole experience. This dome-shaped orgasm has many peaks along the way and is applicable for both women and men.  When the focus is on building sensation the possibility exists to feel intensity usually reserved for the climax.  The orgasm can be continuously sustained and expanded for longer periods of time where it keeps feeling better and better. The Welcomed Consensus has a library of videos from introductory to advanced that show both how to have and how to produce this type of optimum orgasm.

As Lexi, (the Goop Lab participant in the experiences offered with Betty Dodson/Carlin Ross and Isabella Frappier) notes at the end of the episode how important it is to “own your own body, to have a healthy, positive relationship with your body, and owning your own pleasure” she looks like a transformed woman and is radiating confidence and glowing with pleasure.  I wholeheartedly agree with Lexi and it is great to see more women owning their orgasm, their pleasure, and going for it!  A big thank you to Goop, Betty Dodson, Carlin Ross, Isabella Frappier and the Welcomed Consensus for paving the way for women to experience their orgasmic potential through gaining knowledge about how their bodies work and illuminating the possibilities for us all to be our full sexual shame free selves.