A Female Model of Orgasm

Question: I have been reading your web site for several months and I am left with a recurring question in my mind: Where does climax fit in to the Welcomed Consensus’ definition of orgasm?

When people think about orgasm, more likely than not their concept of orgasm has been severely limited in ways that they aren’t even consciously aware of. This is due to a definition that lies behind the way that the word orgasm is most commonly used, and effects nearly every sexual encounter a person has. This definition is based on Masters and Johnson’s research of orgasm: 6-9 contractions on average for men in 10 seconds, and 9-12 contractions in 10 seconds for women.

This has become the standard cultural definition of orgasm. Looking further into this definition, and thereby the ways that society views orgasm, we see overwhelmingly that this model is primarily goal-oriented. The climax of the sexual encounter is defined as the peak of the entire sexual experience. Thus the focus is put on the climax as an end-goal of all sexual activity.

With this standard, a typical sex act between two people goes something like this: A man and woman start out with some sensual contact, their genitals get together, they start having intercourse, and when the sensation peaks – ejaculation occurs. After ejaculation, the orgasm is over, the sensual contact is over, and the person who ejaculated usually does not want any more stimulation. Therefore, when the male ejaculates it often signifies the end of the sex act.

Both men and women strive toward achieving this type of orgasm, specifically the ejaculation, or for women, the over-the-edge or climactic experience. By this standard of orgasm, there is less sensation in a person’s body after the over-the-top experience than there was prior to having the sex act. If a person does not experience this kind of climax, they are considered to be unable to achieve orgasm, or in some cases their sexual ability is labeled dysfunctional.

A New View of Orgasm

The research of the Welcomed Consensus is based on a female model of orgasm. It is a pleasure-oriented orgasm, where the goal is to feel and enjoy each stroke, and take pleasure in the whole experience. It is a dome-shaped orgasm, with many peaks along the way, applicable for both women and men.

There is no actual way to measure pleasure. Orgasm is ephemeral. When a person is in orgasm, they may experience contractions, flushing, abdominal ridging, ejaculating, heavy breathing, etc. These are all possible signs of orgasm, but not necessarily an indication of how much sensation a person is experiencing. With female orgasm as the model, the goal is pleasure; to produce the optimum amount of sensation in a partner’s body, every time sexual contact is made. When a person approaches their sex life with female orgasm as the model, everything changes. The goal is pleasure – with that in mind you engage all of your senses. How you look at your partner is different. The way you touch your partner is for the pure enjoyment of it. How you listen to them, how you feel about them. You have the sensation feel as good as possible for as long as possible.

The most effective way to produce orgasm in a woman’s body is through manual stimulation of the clitoris. This is a great method for men to know, because they need only a finger to create incredible and beautiful sensation in a woman’s body. When manually stimulating a woman’s clitoris, use a short, light and consistent stroke that will bring her to orgasm relatively quickly.

Approaching sex with a partner using female orgasm as the model, the goal is not taking her over the edge, or ejaculation or climax. The goal is pleasure in every stroke. This orgasm will take infinite forms. She may ejaculate. She may go over the edge. She may have a relaxing, meandering ride that includes going up and going down. This is where peaking comes in. You can peak her to extend her orgasm, creating more intense orgasmic peaks that can last as long as you both want. By the end of the orgasm, there will be more sensation in her body than there was before. She may get up from the bed and want more later on. This is continuous orgasm. 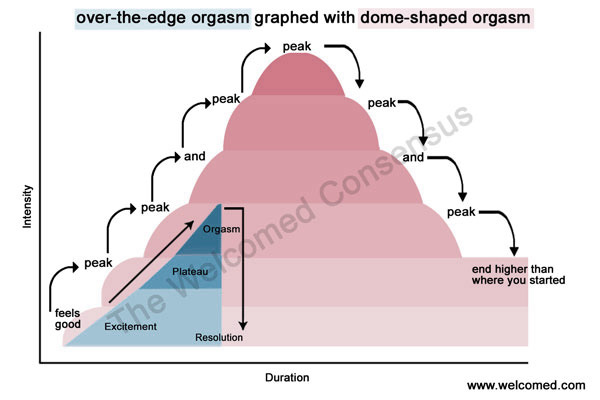 Extended Orgasm for Both Women and Men

Recent research has determined that both males and females can remain in the orgasmic phase for much longer than earlier studies indicate. Using a female model of orgasm, both men and women can experience extended, continuous orgasm that can last for the duration of one stroke to an hour or longer.

Deliberate Orgasm researched by the Welcomed Consensus is contributing to this new view of orgasm. This model of orgasm is now being seen more in the mainstream. The technique of DOing, Deliberate Orgasm with peaking is a way to expand orgasm, and to add on to what people already do in their sex lives. Both men and women can learn a lot about their orgasm using the model of female orgasm. It is the way to have more than just the status quo.

The female model of orgasm is demonstrated in all of the Welcomed Consensus Videos.