Extended orgasm is available with unlimited potential through the technique of peaking. See how to build progressively higher and more intense orgasmic peaks.

In the context of DOing the Welcomed Consensus demonstrates ways to build progressively higher and more intense orgasmic peaks. Signs of orgasm in a woman's body, tension and relaxation, dome shaped orgasm, the idea of control by agreement and what a man feels while DOing a woman are illustrated. Vivid changes occur in Francoise's body as RJ manually stimulates her clitoris. Close-up shots show the specific techniques used to peak her and the changes that happen in her genitals while in orgasm.

Unlimited pleasure is available through the technique of peaking & extended orgasm DVD. See how to build progressively higher and more intense orgasmic peaks.

Extended Orgasm is available with unlimited potential through the Technique of Peaking.

This video’s focus is the art of a man producing an intense continuous orgasm in a woman’s body. He achieves this by directly stimulating her clitoris using the Deliberate Orgasm technique, called DOing.

DOing is when two people agree to put their attention on one person’s pleasure. The man as the DOer is able to control the level of orgasm in her body by peaking her. The Peaking technique allows the DOer to increase the intensity and duration of her orgasm, giving her a better orgasm than she can give herself.

The Welcomed Consensus instructors demonstrate ways to build progressively higher and more intense orgasmic peaks. Signs of orgasm in a woman’s body, tension and relaxation, dome-shaped orgasm, the idea of control by agreement, and what a man feels while DOing a woman are illustrated. Vivid changes occur in the woman’s body as the DOer manually stimulates her clitoris. Close-up shots of her genitals in orgasm contracting, engorging and changing over time as well as the techniques he uses to peak her are shown. This educational video illustrates the potential of continuous orgasm with peaks.

The only goal in this production is creating and having orgasm for the pure pleasure of it. All of the Welcomed Consensus videos are luxury items made specifically for the serious sensual researcher who wants to have a sex life that keeps getting better over time.

Customer Review of The Technique of Peaking & Extended Orgasm DVD 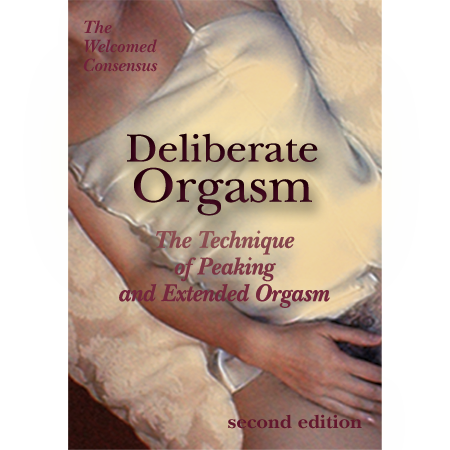 “This video gave an advanced demo of the Deliberate Orgasm technique, which I have been happily using since I watched their first movie in 1999. The new information is great for lovers of the female orgasm. “Peaking” is a way to have the sex keep building way beyond the point that it would normally peak and wane.

After 8 years of using Deliberate Orgasm, my partner’s privates have gotten even more sensitive than they used to be. Her erogenous zones are more erogenous. Since I started using some of the Peaking techniques, she wants it more than ever. After the first couple of years we were together, we both started worrying that the romantic side was cooling off. Boy, I haven’t worried about that for a long, long time. We used to like watching those hardbodies making love in the Bahamas to get the juices flowing, but these ones actually made us both better in bed. I learn something every time I watch it. I would give a strong recommendation for the first Deliberate Orgasm video and this one together.” –KSB