All Female Orgasm is Clitorally Based

When it comes to female pleasure, it’s essential to know clitoris anatomy. Where is the clitoris and what is its function in female orgasm?

The clitoris is a complex structure that includes external and internal components. Starting at the glans, covered in full or in part by the clitoral hood, it extends back and up along the shaft for several centimeters before it reverses direction. There it enters the body and splits into an inverted V shape known as the clitoral crura or legs of the clitoris, which are located generally behind the labia minora.

Every woman’s pleasurable anatomy is unique to her. The shape, size and coloration are one-of-a-kind. There is considerable variation in how much of the clitoris protrudes from the hood and how much is covered by it. It can range from being completely covered to being fully exposed. The glans can be fully exposed by pulling back the hood. However, there is no correlation between the size of a clitoris and a woman’s age, height, weight, race, use of oral contraceptives, menstruation cycle, stage of menopause or how much she feels.

The clitoris is the seat of all female orgasm. The clitoral tissue is far more widespread than the glans, the small visible part most people associate with the word. During orgasm, the clitoris and the genitalia engorge with blood and change color. The external and internal genitalia consist of erectile tissue. When a woman or her partner stimulates her glans, both the internal and external portion engorges. Although the internal portion of her clitoris is filled with pressure-sensitive nerve endings, the vagina itself has no pressure sensitive nerve endings. However when a woman or her partner properly engorges her clitoris, her Thunkspots can be easily stroked through manual penetration or during intercourse.

The Clitoris and Female Orgasm

When people talk about orgasm they are referring to the definition described in 1966 by Masters and Johnson. In their book Human Sexual Response the authors describe both the male and female sexual response cycle as having four phases. In this model the orgasm lasts from 6 to 12 contractions. The release of the built up pressure all at once is what people exclusively call the orgasm. This definition ignores all other pleasurable sensations.

Current research has determined that people can experience sustained and intense orgasm which falls outside of the historical limitations. This can happen for women through stimulation of the clitoris. In addition, both males and females can remain in the orgasmic phase for much longer than earlier studies indicate. Deliberate Orgasm research by The Welcomed Consensus, using female orgasm as the model, is contributing to this expanded definition. Recently the mainstream media has brought attention to this new approach to female sexuality.

When men and women go beyond the traditional cultural approaches to sexuality, they greatly enhance the pleasure available to them. Expanding their view of orgasm increases their ability to experience intense pleasure with a richer connection and a more enjoyable sex life.

This contemporary view of orgasm is explained and illustrated in the Female Orgasm Video Library. In this unique set of educational videos, instructors clearly show the clitoris anatomy in action for anyone to learn. Each of the instructional videos uses close-up camera shots of a woman in orgasm to demonstrate manual stimulation of the clitoris. 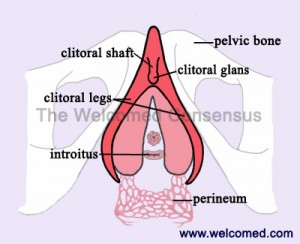 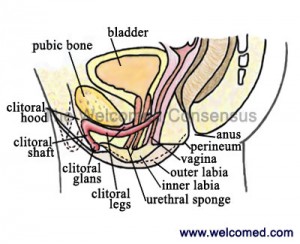 View clitoris anatomy in action through our extensive Female Orgasm Video Library. I felt this experience of being grateful for my clitoris, for what it can feel, for what is available. I had a new enjoyment of it and experienced it in a new way. When he first started DOing me, I simply felt the sensation of his finger on my clitoris. My clit engorged and the sensation reverberated then spread out. He’d stroke bringing me up on a peak. I felt my clit lengthen and press into the tip of his finger. He described the experience as if my clitoris was getting fuller like blown glass. He and his strokes being the glass blower…